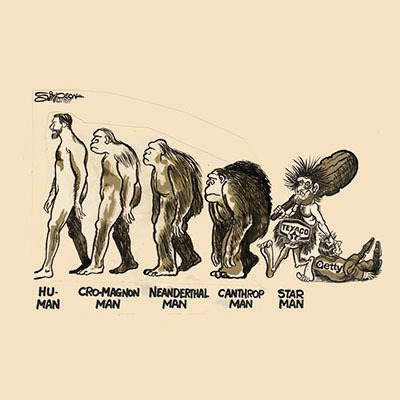 In 1987, Dr. Barbara S. Griffith, head of the Center’s Office of Oral History, launched a multi-year project to document the legal fight between Pennzoil and Texaco over the purchase of the Getty Oil Company.  The controversy began when Pennzoil filed suit against Texaco, charging that Texaco had enticed Getty to break a contract it had signed for a merger with Pennzoil, in favor of an outright sale of Getty to Texaco at a higher price per share.  The case was tried before a Houston jury, which awarded Pennzoil $10.4 billion, the largest civil judgment in American history.  Beyond the size of the judgment, this conflict and its historical implications proved to be a rich source for oral history research.

Among those Dr. Griffith interviewed were Joe Jamail, one of the country’s most successful personal injury lawyers and a lead figure on Pennzoil’s trial team; Gordon Getty, an heir to the Getty fortune and a major shareholder of Getty Oil Company; and the Texaco executive who oversaw the transition at Getty’s California headquarters after the company’s sale to Texaco. Her interviews, available for research, led to Pennzoil donating two collections—Pennzoil Company v. Texaco Inc. Case Records

View our Research page for more information about in-person research

Our main exhibition galleries in Sid Richardson Hall are open to the public Mondays-Fridays. Reservations are recommended.

Our historic sites are open to the public. Please see the Visit page for details.

Our staff continues to monitor online queries and requests. We are providing remote reference services via email, phone, or teleconference, as well as duplication/digitization services. Contact us (below) and select "Reference" from the dropdown to request assistance. More details are available on our Research page.

The Briscoe Center has a variety of online tools to help researchers explore our collections and find the information they seek. These tools include databases, subject guides, and others that are free to peruse online. Visit our Online Reference Tools page to get started.